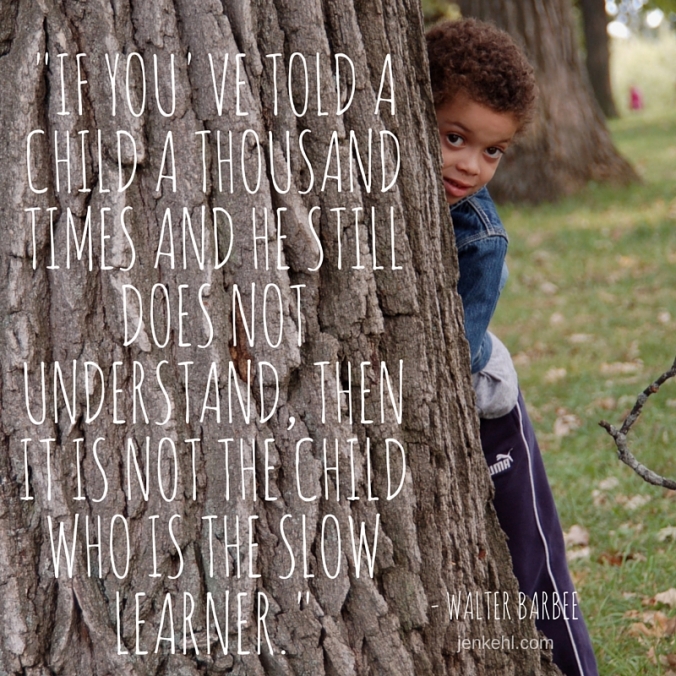 I just read that Tom Cruise could barely read or write until he was 19. Then he got his first role, and realized that he would need to be able to read to become the actor he wanted to be.

Unfortunately, I don’t have a starring role in a hit film to motivate my son to read.

And I would guess, if given the choice to work his butt off to learn how to read so he could star in the next Mission Impossible film, or to not read at all, right about now, I’m thinking he’d choose – not read.

Being 10 (or wherever your child may be) and lacking such strong external motivation, I have to support him where he is. And right now, he’s a kid who thinks the world thinks he’s dumb because he can’t read, and that Dyslexia is a four letter word. (I know there’s a joke in there somewhere.)

So, when I happened upon this quote, I realized what I had been doing wrong for the last few years.

If you’ve told a child a thousand times and he still does not understand, then it is not the child who is the slow learner.

I have been calling my son a reluctant reader since he was 5.

When every other kid was sounding out Sandra Boynton’s Moo Baa LaLaLa mine was happily listening to me read it.

It didn’t matter how often I ran my finger under every word, he just sat there happy as a clam as I read.

The years passed and I read.

Make no mistake, he loved books! And as an extension, loved being read to.

So many hours spent at the Library picking out books. Books to read, audio books to listen to in the car. Books, books and more books.

But we had a secret, a secret perpetuated even more so by the fact that he has such a gifted vocabulary. The secret was that he couldn’t read.

In all of my homeschooling books and curriculum, I had often read how when a child is ready to read, he will read. And so I waited.

Sometime around 8, I started quietly asking around other homeschool moms and groups, and every where I went I got the same answer. “When he’s ready, he’ll read.”

I heard stories about 11 year olds who finally were motivated to read when they wanted to learn code, or wanted to become the best at a video game, and then the next thing you know they were reading 700 page books.

So I waited. I waited and I watched, but in my heart I knew something was wrong.

Because Isaiah did want to read. Reluctant reader was not really the right term for him. Kid who couldn’t read and was super frustrated whenever he tried and had tantrums and fits would have been more accurate.

But I am nothing if not a Queen of Denial, and I was trying. MAN I WAS TRYING.

I defended his reading reluctance to my family. I felt threatened and hurt and scared. And secretly I worried I was making a mistake by not aggressively intervening.

But. If you’ve told a child a thousand times and he still does not understand, then it is not the child who is the slow learner.

It took me aggressively intervening to realize he was not ever going to learn to read like other kids.

There was not going to be an Aha! moment. He wasn’t going to pick up Harry Potter and devour it in one weekend curled up on the sofa with a do not disturb sign.

And so I sought help from a professional.

As I sat across the desk from a really super nice doctor guy, who doesn’t pull any punches, but at least punches you with a sense of humor. I sincerely believed that he would tell me my son was fine, the problem was I was not teaching him correctly.

Instead I heard. “Your son has severe dyslexia, and how far he has gotten is a testament to how hard you have worked with him.”

Apparently there is not a diagnosis of reluctant reader. That’s not actually a medical term, or a learning disability. For me that term helped perpetuate the denial I was living in. And I used that term to help other’s perpetuate their’s as well.

It did not help my son.

Time spent looking back on the “what if’s” and the “shouldas” is time wasted. And so I do my best not to go there.

Time spent sharing my story, is like spreading gold. If one mom in one group had said to me, “Your story sounds just like my son, and it turned out my son had dyslexia.” Well then, she would have saved a lot of tears and tantrums, and been a true blessing to this family.

And so I am sharing this story and our journey with you. Because if you share this with just one mom of a “reluctant reader” and she hears you. Then my work here is done.

I wrote a post about how I came to grips with those feelings right after the diagnosis on my other blog, it’s too soon to repost it, so you can go read it here.

Stay tuned by subscribing to my blog, this week I will outline our week one curriculum. And I will be sharing my thoughts on the Gifts of Dyslexia.

10 thoughts on “He Might Be a Reluctant Reader, Or Maybe He Can’t Read – How I Missed My Son’s Dyslexia” 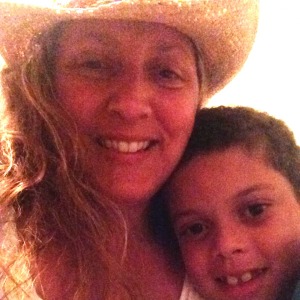