My husband and I always planned to home school.

Even before Isaiah was born it was the plan. So I had plenty of time to decide how we would go about it. I read lots of books, did a ton of research, checked out everything from Unschooling to Classical Schooling to Charlotte Mason. I researched it all.

I liked the idea of unschooling the best. It resonated with me. The freedom to learn about what you loved made sense. If you were passionate about it, it would become a part of you.

Sometime around 3 or 4, I started to be afraid of the idea of unschooling. What would that really look like I wondered. How would I have anytime to myself if Isaiah had no structure? How would I know what to do? Already thinking too much, I decided there was a happy medium and that would be Waldorf. Well, it seemed like a good idea at the time.

Luckily Waldorf kindergarten is basically unschooling, and Waldorf first graders should be 7 or turning 7 the first few months. So we had lots of time to prepare. I became an expert in Waldorf Homeschooling (as much as one can be without schooling). I knew what we should do and was ready to do it. What I wasn’t prepared for was Isaiah not wanting to do it.

Well, I thought, what kid wants to do school? I became part of multiple forums, I queried “What if he doesn’t want to do form drawing?” the response was “You are not asking him, you are telling him. ‘Now we are doing form drawing’.”
“Yes, but what if he won’t do it even when I say that.”
“Then you say, ‘this is what we’re doing now, we can’t do the next thing until we finish this'”

Well, that seemed fine and dandy, but these “experts” did not know my son. I tried that tact and we spent hours in struggle. 2 months into first grade I gave up. I couldn’t spend the whole day sitting on the sofa needle felting while saying “Just let me know when you are ready to start Form Drawing (or whatever) then we can move on.”

A child shouldn’t be so averse to doing something, that he willingly gives up everything that brings him joy to avoid it.

And so, a third of the way into first grade we began informally unschooling. There was some structure; in the form of me reading to him everyday, him developing an on and off interest in needle-felting, science projects that involved fire, and nature walks. We went to the library often and checked out books on topics that interested him like Thomas Jefferson and The Titanic.

Then the family started asking questions. Why can’t he read, he’s 7 already! Why can’t he do math? I started to become self-conscious and bought the Bob Books and tried to teach him to read. He did not like that.

So we took a break and decided for second grade we would try Waldorf again.

We are one month into second grade. Apparently I have a thick skull and do not learn from past mistakes.

This year was even harder. He is 8 and his beautifully rich mind has also learned more effective ways to show-off his temper.

In my current state of denial I refused to see that what was setting him off was school. Everyday I would say, it’s time to start our day. He would say “NO! I don’t want to do school! I hate school!”

Second grade Waldorf involves learning to read and learning math. It is a little more aggressive, although it allows for the slow learners, but I didn’t believe he was a slow learner. What I believed was he didn’t want to do it.

So we stuck with Form Drawing because I was making it fun. Let’s make this castle turret, do you want it to be a haunted castle? Let’s read this story about the King of Ireland, and draw a wavy line like when he is stuck in the cave.

But eventually, I thought, we needed to get back to the reading. Boy was I in for a surprise. The tantrums got so bad I had to lock myself in my room. I was lost and had no idea where to turn. I didn’t believe him when he said it was the reading. I didn’t want to think that my son didn’t want to read.

I reached out to the most brilliant homeschooler I know. Jane from Undogmatic Unschoolers, if you aren’t following her you should be.

She put me at ease, she reminded me that he would read when he was ready,

but if I pushed him, he would never love to read

She said, find some learning apps on the iPad but most of all read read read to him!
Well, that was easy. We were already doing that.

And so. We have come full-circle. We are unschooling again.

In his tantrumus rage, we decided we would call school “playtime” to stop his anger before it started.
The last two evenings he said “Mom! We forgot to do ‘playtime’ today!”
“No sweetie, we didn’t. We read Carry On, Mr Bowditch didn’t we? And The Willoughby’s? You built a ship in the living room with 3 masts and working flags. You colored a ton of sailing ships and we went for a walk everyday. I would say we did plenty of ‘playtime’ ”
And he said, “Mommy, I love you so much. These are the best days ever, I love ‘playtime'” 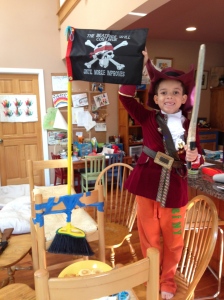