Something I had been missing from our Waldorf days was our morning walks, partly because the weather got cold, and also because we had lost our way… Today was going to be my attempt to bring one more aspect of what I love back to our homeschool day.  (There are more, and I will post about that later.)  Today I decided it was about time we got outside again on a regular basis.  Well, we live not far from Chicago, so you know, it’s not warm here.  Not by a stretch.  Truth be told, I immensely dislike being cold.  Really.  I joke that I get a babysitter just so Isaiah will have someone to go outside with him.

I don’t know exactly what happened.  Maybe something inside of me was whispering, “you need to get outside too” but this morning as I was standing in the backyard with the dogs, I noticed that the air had that really refreshing quality to it.  The wind was blowing in pretty strong gusts, but it was about 30 degrees, so it wasn’t so bad.   It felt a lot like the wind was coming from the lake, which frankly just makes me want to take a deep breath and stay outside.  The sky was pretty gloomy towards the west, but I took only passing notice of it.

I came inside with the dogs, and Isaiah was his regular screaming banshee self.  I had a bit of a headache, so it was hard for me to be tolerant of his rambunctiousness this morning.  I had gently tried to explain that Mommy had a headache, that would last about 5 minutes before he started screaming again.  Now don’t get me wrong, he wasn’t just sitting there screaming, he was a pirate (I think, like I said I had a headache).  He had two swords. a rifle and a pocket-watch and was playing an elaborate imagination game.  Usually I am much more tolerant of this, I mean he was using his imagination, but given the state of my head I needed something to change.  So I said “hey, let’s go for a walk”.  He looked at me like I was crazy, he knows how much I dislike the cold.  “No, I don’t want to.”  Well I know how he operates, so I said OK, and proceeded to make some tea.  Minutes later I had to ask him to settle down again, he said “you know what? let’s go for  a walk.” Bingo!  “Can I bring my sword and my rifle?”  I agreed, anything to get him outside.  We began to really bundle up, no use being uncomfortable, this way we could take a long walk.  He decided he didn’t want to have to carry his sword and rifle, because he was going to take his bike instead.  Well, as long as he bundled up, right?

So, we were prepared to leave, we opened the door.  The minute we stepped outside the flurries started.  “It’s snowing!” Isaiah shouted excitedly.  Yes it was, well what could be nicer than a walk in the snow.  Only, by the time we got a block from our house it looked like this.

I don’t think I’ve ever been outside, just for fun, when a full-blown blizzard has descended upon our town.  It was pretty cool.  I could have said let’s turn back, but I thought, hey, what’s the worst that can happen?   We’ll get cold?  So we kept on truckin’ Isaiah riding his bike in the deepening snow, and me walking behind him really letting myself enjoy this wonderful example of God’s beauty in nature.  By the time we were about a 1/4 mile from home, I would say visibility was down to about 50ft.  We were at the park, where there is a huge field and running track around the track.  Isaiah was riding ahead of me, and he would get far enough ahead I could barely see him, but knowing there was nowhere for him to go, I just enjoyed.  For me this was a milestone, I didn’t even rush.  In the end, we were gone for about an hour.  By the time we got home, we looked like snowmen ourselves!  We un-bundled, lit a fire in the fireplace, made some hot chocolate and relaxed to some books and a game.  It was such a wonderful way to start our day, to get som of those ants out of his pants, and to help me get re-connected.  I will continue to try and get him outside every morning, and to remind myself how much being outside is good for our souls. 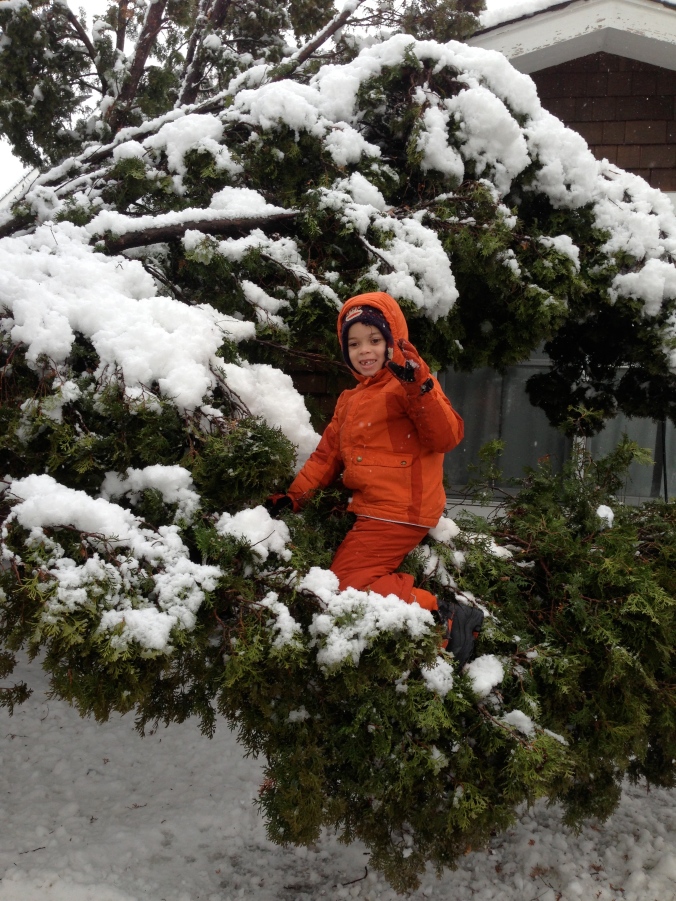 Next day, after about a foot of snow (and it’s still snowing), Isaiah riding the weighed down Arbor Vitae, like the dragon in “The Land of Long Ago” by Elsa Beskow!

Shared this post with Our Seasons of Joy’s Waldorf Wednesday

2 thoughts on “Thank Goodness for Wool and Uggs!”